... to be jolly, falalalala lalalala!

7 days to Christmas. Have you done your Christmas shopping yet?

I hope you have.

Well, I only started yesterday. I spent 2 hours and managed to buy 4 pressies - would have been 5 if not for the shop not having stocks of one.

It helps if you know what you want to get and where to get them.

I love shopping early in the morning when there isnt much of a crowd. Once it hits lunch hour and the shoppers come in droves,I much prefer to make my way home. Only problem is that many shops only open at 11am, some at 10, so I only have 2 good hours of shopping a day.

I am also one that shops better under pressure ie when I dont have much time left. Makes me less wishy washy. When I shop early I tend to come across other things later which I may feel may make d a better gift. That's me.

Tis is also the season to go on vacations!!

With at least 6 weeks of school vacation for the children, we usually travel at this time of the year.

This year we went to Melbourne, and I managed to get help in planning for my trip from a fellow blogger, Mott.  (http://mottisland.com/). Thanks Mott for helping me plan the meals during my trip. I must say: Melbourne has amazing eats!! The range of restaurants and the quality of the food probably helped it to win "The best city to live in" title.

Wishing all a Blessed Christmas. May it be filled with peace, hope, love, laughter and good food!! 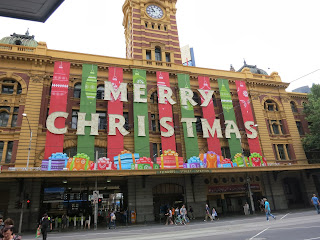 Posted by stay-at-home mum at 7:33 AM No comments:

For those of you who are following my daughter's medical condition, we have crossed the first hurdle.

She has had her first pamidronate infusion last week and will be doing it every two months.

It went as expected:

* not covered by the insurers as it is congential - such a bummer this is!!

* she had the fever - but thank God it didnt go too high. 8 hours after the procedure she still hadnt had any fever and we were rejoicing until the doc told us that it will only come on after 24 hours. Sure enough, it did. But luckily it hit a peak of 39C and then it came down over a two day period.

* her bones ached for days after.

* no nausea, allergies. Praise the Lord!!

* she is not drinking as much as she should. I now worry when the procedure is done during the school term as there will not be anyone monitoring her fluid intake!

* she didnt cry when the  cannula was inserted. So proud of her. Such a brave girl.

* her pulse rate dropped mid-way during the procedure, and they were really concerned about it. They did get it up back to normal when they realised it.

* she lost her appetite for food for a few days. Eating half her usual :(

* one of her tooth fell out  mid-way during the infusion!

* she was in high spirits despite everything!!

* the insistence of the hospital on my child being wheelchaired around for her kidney and bladder scans. My child is well and capable of walking. We wasted an hour just waiting for the porter to come get her and then wheel her back.

* the late start of the procedure. It didnt start until 7.30pm when she was admitted at 3pm. As the procedure took 4 hours in total, the poor girl was totally tired out at the end of it, as she was not really able to rest despite it being administered intravenously  as she was constantly montiored. Every half  to an hour there was someone coming in to check her for bruising, allegies, blood pressure, pulse rate, temperature, etc.

* Not being able to sleep even after the procedure as she was still being constantly monitored. They were taking her temperature, blood pressure and pulse rate all through the night. And even I couldnt sleep as every time they came into the room, they insisted on checking with me whether she had drunk any water and if she had gone to ease herself.

* the error of the pharmacist on duty in the supplements given whilst in the hospital!!

* the long time it takes for them to dispense medications for us to take home with us. 4 hours??? I would have waited a much shorter time had they allowed me to go to the hospital pharmacy to collect it on my own!!


What I was happy with about the whole thing

* Prof was more chatty and forthcoming with information as compared to when we were in his clinic. My guess is that he has too many patients to see during his clinic consultation hours and all he wants is to get them out the door!!

* the nurses were really attentive and took good care of my child.

* I was given an orientation of where I was to go for her future visits, which fortunately will not involve a hospital stay!!

This is going to be something we have to do for many years to come!!
Posted by stay-at-home mum at 8:20 AM 1 comment: