Throughout the centuries, mothers have been given their children plenty of good advice and notable quotes. Here's just a small sampling:

PAUL REVERE'S MOTHER: "I don't care where you think you have to go, young man. Midnight is past your curfew!"

MARY, MARY, QUITE CONTRARY'S MOTHER: "I don't mind you having a garden, Mary, but does it have to be growing under your bed?"

MONA LISA'S MOTHER: "After all that money your father and I spent on braces, Mona, that's the biggest smile you can give us?"

HUMPTY DUMPTY'S MOTHER: "Humpty, If I've told you once, I've told you a hundred times not to sit on that wall. But would you listen to me? Noooo!"

COLUMBUS' MOTHER: "I don't care what you've discovered, Christopher. You still could have written!"

BABE RUTH'S MOTHER: "Babe, how many times have I told you -- quit playing ball in the house! That's the third broken window this week!"

MICHELANGELO'S MOTHER: "Mike, can't you paint on walls like other children? Do you have any idea how hard it is to get that stuff off the ceiling?"

NAPOLEON'S MOTHER: "All right, Napoleon. If you aren't hiding your report card inside your jacket, then take your hand out of there and prove it!"

CUSTER'S MOTHER: "Now, George, remember what I told you -- don't go biting off more than you can chew!"

ABRAHAM LINCOLN'S MOTHER: "Again with the stovepipe hat, Abe? Can't you just wear a baseball cap like the other kids?"

BARNEY'S MOTHER: "I realize strained plums are your favorite, Barney, but you're starting to look a little purple."

MARY'S MOTHER: "I'm not upset that your lamb followed you to school, Mary, but I would like to know how he got a better grade than you."

BATMAN'S MOTHER: "It's a nice car, Bruce, but do you realize how much the insurance is going to be?"

GOLDILOCKS' MOTHER: "I've got a bill here for a busted chair from the Bear family. You know anything about this, Goldie?"

LITTLE MISS MUFFET'S MOTHER: "Well, all I've got to say is if you don't get off your tuffet and start cleaning your room, there'll be a lot more spiders around here!"

ALBERT EINSTEIN'S MOTHER: "But, Albert, it's your senior picture. Can't you do something about your hair? Styling gel, mousse, something...?"

GEORGE WASHINGTON'S MOTHER: "The next time I catch you throwing money across the Potomac, you can kiss your allowance good-bye!"

JONAH'S MOTHER: "That's a nice story, but now tell me where you've really been for the last three days."

SUPERMAN'S MOTHER: "Clark, your father and I have discussed it, and we've decided you can have your own telephone line. Now will you quit spending so much time in all those phone booths?"

THOMAS EDISON'S MOTHER: "Of course I'm proud that you invented the electric light bulb, Thomas. Now turn off that light and get to bed!"


And from one Mum to all you others: Have a great weekend!!
Posted by stay-at-home mum at 6:00 AM 3 comments:

Last night Harry and his wife were sitting in the living room, talking about life...

In-between, they talked about the idea of living or dying.

He said to her: Darling never let me live in a vegetative state, totally dependent on machines and liquids from a bottle. If you see me in that state I want you to disconnect all the contraptions that are keeping me alive, I'd much rather die'.

His wife got up from the sofa with this real look of admiration towards him.....and proceeded to disconnect the TV, the Cable, the Dish, the DVD, the Computer, the Cell Phone, the iPod, and the Xbox, and then went to the bar and threw away all his whisky, rum, gin, vodka and the beer in the fridge...

The 2 morals of this story are:
1. Think carefully about what you wish for...
2. The female brain works on a different wavelength ...

I know it's not yet friday ... but, a midweek week joke will make the weekend seem so much nearer! Have a great week ahead!
Posted by stay-at-home mum at 2:14 PM 4 comments:

Have you met a Japanese Turtle before?

No? Neither have I,... and I missed the opportunity when I was not selected as a parent volunteer to go with Little D's class for their field trip to the zoo yesterday. :(

She was all excited when she came home from the zoo and was telling me all about the animals that they saw. Then she said: Do you know that we saw a Japanese turtle??

Me: Huh? How did you know it was a Japanese turtle? Did it speak Japanese to you?

Me: Then how did you know it was Japanese?

Little D: Bryan told me, and I too saw the Japanese words near the turtle!!
(Her friend and partner for the field trip, Bryan is half Japanese)
Posted by stay-at-home mum at 6:07 AM 5 comments:

SENIOR CITIZENS ARE THE NATION'S LEADING CARRIERS OF AIDS!

MONETARY AID TO THEIR KIDS!

Not forgetting HIV
(Hair is Vanishing)

There's no pleasing me.

Well my main grouse at the moment is having to pay taxes.

Paying taxes mean that we have had income, which is a good thing. If not, how to be able to enjoy the life that we live.

Last year, I didnt pay any taxes. Why, becoz I had no taxable income. The business that we ran incurred a loss - I guess that was acceptable given the bad economic climate here at that time with many people losing jobs and companies cutting down on their spending. I was not happy. Coz for all the hard work that hubby put in, there was nothing to show for it.

This time round, business has been pretty brisk. But again I am not happy! Why? Becoz just looking at the tax returns that I have just completed there is going to be so much taxes that I have to pay!!

No profits = Unhappy me.

Profits = Also doesnt please me too much.

But I guess, this time round it's a good problem to have!

Yes, I am difficult to please. But isnt that human nature?
Posted by stay-at-home mum at 9:29 AM 7 comments:

"Love that water running down your butt" little D said to me one day as I stepped out of the shower. (I tell you I have no peace even when I shower).

I smiled, towel dried myself and started to get dress.

"Now you have covered up the water with your panties!!" she exclaimed.

I thot I hadnt dried myself properly, and said, "Dont worry the water will no longer be there."

Two days later, she was again in the bathroom as I stepped out of the shower. (I tell you she never leaves me alone!!)

"I cant be going around with water on my butt all day long." I said and this time I made sure I dried myself properly. "There! No more water."

"It's still there Mum, and I think it's so cool!" she said. I then realised that she was referring to those cellulite marks on my butt!! "How do you get them? I want them!" she said.

I roll my eyes. "You wouldnt be saying that when you are my age" I told her, and went on to explain to her how those "stretch marks" came about.

So now you know, I have lots of water all about me. ""Shui" like the chinese say represents money and wealth, but I hope that's not the only wealth I have!!

My oven had been cold at home for quite awhile, not since the year started, I think. I didnt bake ANY cookies at all during CNY, and it was only recently that I did some baking.

1st was the apple turnovers and the apple strudel (just like the famous ones made by Corica in Perth). 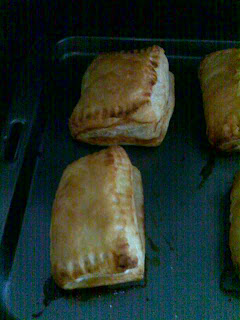 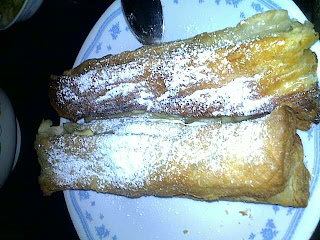 Taste-wise it came out pretty well, and I now have a friend wanting to order them for an upcoming party. Must say that the thot is giving me the "fear of failure" jitters!!

We were at the supermart a couple of weeks ago, and N requested for some choc chip cookies. Not wanting to buy the commercial ones, I told him I will bake them for him. But my schedule this past couple of weeks had been so busy that I just couldnt find the time to do it!

Yesterday, being the Good Friday holiday here, gave me some much needed break from the usual routine, so I decided to bake him those cookies he wanted. I started off with the choc chip cookies recipe, but along the way I changed my mind

I used the basic choc chip recipe, except that when it was time to add the choc chip, I held out. I then scooped out slim and long spoonfuls of the dough onto the cookie sheet, so that when baked they would be oval in shape. Then my two able assistants took over. S&D decorated them to look like easter eggs. I call them the easter egg cookies. 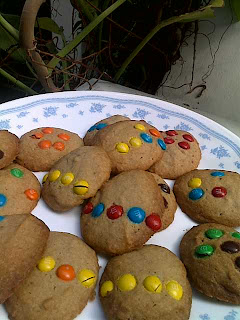 Have a Blessed and Meaningful Easter! God Bless!
Posted by stay-at-home mum at 5:30 AM 4 comments: