Nomination day is here, and polling day is just around the corner.

Who will you vote? Will it be the incumbent or the opposition?

Your vote counts! It will decide the future of our country and how you and your children will live.

Vote with a conscience, not your whim.

You are affecting your future and MINE! Vote wisely.


"Get all the fools on your side and you can be elected to anything."
- Frank Dane.
Posted by stay-at-home mum at 6:26 AM 5 comments:

Wishing all A Blessed Easter!!

My Lord he died for a kingdom
To redeem the hearts of men
Now my people don't you weep
He has risen from his sleep
He lives Again
Alleluia!

Sing Alleluia
The Lord is Risen
He is Risen indeed Alleluia!!
(The Easter Song)


And here are some Easter Riddles for your enjoyment:

Q: Why did the Easter egg hide?


A: He was a little chicken!

Q: What do you call ten rabbits marching backwards?


A: A receding hareline.

Chocolate causes certain endocrine glands to secrete hormones that affect your feelings and behavior by making you happy. Therefore, it counteracts depression, in turn reducing the stress of depression. Your stress-free life helps you maintain a youthful disposition, both physically and mentally. So, eat lots of chocolate!
Elaine Sherman
Book of Divine Indulgences

Guess we should all indulge in all those yummy Easter Chocolates :D

Do you know that today is a hump day?

Wednesdays are called hump days coz it is the middle of the work week, and as soon as we get over this hump of a day we will be rolling very quickly towards the weekend. And this week, it is a small hump to get over coz we have a long weekend here, due to Good Friday public holiday!

So have a great hump day!!

(And dont get the wrong idea and go humping anyone!!)
Posted by stay-at-home mum at 8:10 AM 5 comments:

We had caught a movie last saturday evening and had gone for supper after that. As we were driving past KFC, on our way home D decided to read the ad they had put outside their restaurant.

"Now serving breakfast," she said, paused and then added "At this hour??"

And all of us cracked up. It was 9.30pm. Maybe we should have just gone in and demanded for something from their breakfast menu.
Posted by stay-at-home mum at 10:34 AM 2 comments:

15 years ago a friend bought me a book entitled "Dare to Discipline" by James Dobson as a shower gift when I had my eldest.

Why that book? Looking at hubs and me, she reckoned that we were softies, and felt that we had to "dare to discipline" our kids.

I did read the book,and also tried to do some of the things Dr Dobson recommended on how to take control of our kids.

One lesson that I learnt was that there is no such thing as a free lunch ie, never give the kids anything for nothing. They have to work for their rewards.

Well, that was what I have been trying to do ... but I think that's kind of harsh, not? Sometimes we just want to encourage the children, or even pamper them.

Well, my son has always "demanded" for his rewards whenever he does well in school. You see, soccer trading cards are a BIG thing for him, and I try to discourage him from buying them. At $1.80 a pack, you get 5 cards, and what does he do? He just keeps them in his folder and looks at them. As you know, there are hundreds if not thousands of players in the English Premier league. And to have every players' card? I must be printing money in my backroom. And on top of that, new cards come out every season and some of the players change teams. There is no way you can collect them all - a sheer waste of money I feel!!

Anyway to cut a long story short, he doesnt have many of them, and he wants more. Well, last week, my son was feeling very tired from the many weeks of long days in school. To motivate him, the hubs bought him quite a few packs of those cards (Fathers spoil the market!!!). Naturally, he was immediately energized!!

But that is like giving him a free lunch, not?

So like Dr Dobson said: There is no such thing as a free lunch.

What did I do? I told him that now he owes us the good grades!!
*evil grin* Guess, this rabbit is still trying to be a "tiger mum".
Posted by stay-at-home mum at 5:26 AM 5 comments:

Recently I was told that English was a stupid language, and here's the reason why:

We sometimes take English for granted
But if we examine its paradoxes we find that
Quicksand takes you down slowly
Boxing rings are square
And a guinea pig is neither from Guinea nor is it a pig.

If writers write, how come fingers don’t fing.
If the plural of tooth is teeth
Shouldn’t the plural of phone booth be phone beeth
If the teacher taught,
Why didn’t the preacher praught.

If a vegetarian eats vegetables
What the heck does a humanitarian eat!?
Why do people recite at a play
Yet play at a recital?
Park on driveways and
Drive on parkways

English was invented by people, not computers
And it reflects the creativity of the human race
(Which of course isn’t a race at all)

Are our kids getting soft?

After the photo of a maid carrying the backpack of an army boy appeared in the press here, the question on everyone's lips now is: Are our kids getting soft?

I think, the answer is definitely "YES!". In fact, I think , too soft!

Why do I think that?

When our forefathers ventured out, they came with nothing. Hence they had to work really hard to earn a living. The hardship that they faced made them more resilient.

Our parents, were one of many children in the family. Their parents worked really hard to eke out a living, and hence did not have much time for them. They practically grew up on their own, and many even had to look after younger siblings or left school early to help bring home the bread. (Couldnt afford bacon then!)

And from personal experience:

Many of us are having kids later and later. With every year delay in child bearing, it gets more and more difficult. Well, I had my first child after 6 years of marriage, when I was well into my 30s. We had almost given up trying, and then God decided to bless us with our eldest. Naturally, she was SOOOOOOOOOO precious to us, and we gave in to her quite a bit ... and still do.

When our second child arrived, he is the only Grandson carrying the family surname - naturally he is doted on and pampered by his grandparents (and parents too - how can we play favourites right?) - hence, another softie in the making.

As for my youngest, she arrived after I turned 40. As some of you may already know, she does have some medical problems, and as such, she is watched over a little more, and as a result, a little pampered too! (OK, a little may be an understatement).

Hence, my conclusion: with every generation, the kids are going to get softer and softer!
Posted by stay-at-home mum at 9:35 AM 5 comments:

Yes, I havent been baking for a while. Why?

My oven tripped the power supply in the whole house just a couple of days before CNY, so I stopped using it, coz the electrician had gone off duty for the whole duration of CNY and I didnt want to risk being without electricity/lights during that period. That would have been really inauspicious!!

Lack of time. With my son staying back in school 4 days a week this term, (the school is really putting the heat on them!!), I am tired out from making so many trips a day just fetching them, that I want to keep my free time in the mornings for myself. No baking, no stressing myself out as to whether I would have a disaster coming out of the oven.

Weight gain. Not sure if the cause is over-eating, coz I have been watching what I eat, and I walk every week now. It is most likely the middle-age bulge!

So I guess unless this happens, I wont be baking for a long while: 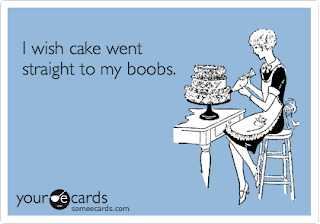 Moving with the times

How do you show someone you love them?

The following are common ways: just being with them, showering them with gifts, buying them flowers, bringing them out to dinner, etc

But in our parents time: Love was hardly "shown". Maybe a grunt or two to acknowledge the others' presence, or maybe just showing up on time for dinner. No gifts, no hand holding, no show of affection whatsoever!

But people move with the times.

They have been married for many, many years. He pretended that he wanted to buy durians for the grandkids, but after buying those durians he said he had to go somewhere else. He drove straight to the mall which housed her jewellers.

He had made an appointment for them to remain open late last nite just for her private viewing and selection!!