Mil was advised by her personal physician to try to eat more healthily - ie - to switch to brown rice, wholemeal bread, more salad, fruits and vegetables. Not that she is not healthy - her recent blood test showed that cholesterol levels are within acceptable levels, and there were no "warning signs" for any of her other tests. She walks twice a day for more than half an hour each time, has oats for breakfast at least twice a week, eats lots of veg compared to me, and she is still trying to improve on that! So I have no choice but to "jia you" too:

Here's what I had for lunch yesterday. 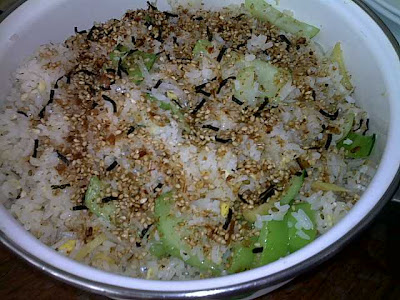 In an effort to have more fresh vegetable/fruit in our diet, we have now decided to have a salad included in our dinner every evening. The salad last evening was: 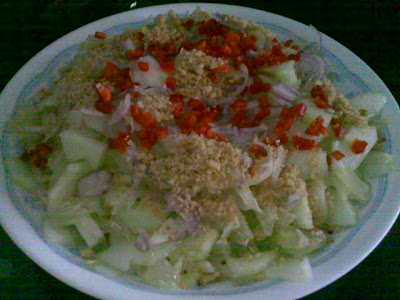 And if you would like to give it a try, here's what that went into this salad:

And for the seasoning:
Lemon Juice
Fish sauce
Honey
Garlic

Trying to be healthy

Yes, I have put on weight again!! Sigh. Previously I would have been very happy to put on weight coz most of my life I had been underweight - blame it on my high metabolic rate.

But not of late. I think I am now at the healthy BMI range, and any more weight gain, would do me no good, hence the need to NOT put on anymore weight. 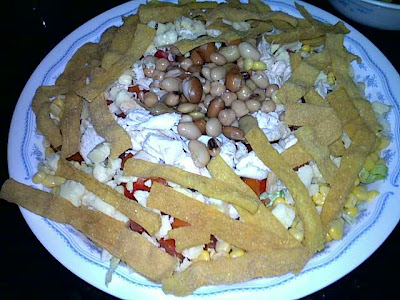 A healthy salad!! This is a meal in a dish and here's the recipe:

The Youth Olympic games is just some 9 months away, and the countdown has already begun. As part of the run-up to it, many schools, as part of their post-exam activities, are holding Olympic Days - well both of my children's school had it. They play games which will be contested during the up-coming YOG, on an inter-class level.

Well, my son represented his class for a soccer game against another class. Let me share with you a beautiful goal he scored.

During the match, he saw an opportunity to score a goal, so he went for it and kicked as hard as he could. He was not wearing his soccer boots but his new pair of school shoes which we had bought just the week before. As the shot went towards the goal, the goal keeper lunged and caught ... my son's shoe - which had come off his foot ... and the ball rolled into Goal!!

Yoohoo! That was definitely the moment of the match and goal of the day!!
Posted by stay-at-home mum at 3:07 PM 3 comments:

Exams are over, Yippee!! And the kids wanted to play, YAY!

Well, my son invited a few .. ok, not a few, but a whole lot of them, over for a "play date". Actually more like a "belated party for my son since he didnt get to celebrate his birthday with his friends coz it was during the exams. They were going to come over for a soccer game (in my garden) followed by more soccer games on the X-box.

In preparation for it, I asked him what his friends would like to eat for dinner. I was thinking of having a BBQ, or something along those lines, since it was a group of boys (read: meat eaters), who from my past experience, would rather not eat coz they just want to play. You see, the last time they were here, many just wolfed down their food really quickly, or just took a courtesy bite just so they could get back to their game. So I thought that if it was a BBQ, they would be out in the garden, away from the x-box machine and be forced to eat. And, in the night, it would be too dark for them to run around the garden! I would feel really bad (like I did the last time,) if they were to go home without eating much. Why? Imagine them telling their parents that they were hungry, and their parents would think that I had no food for them!!

So, my son went around asking them what they would like to have for dinner when they came over. To my horror, my son came home and told me that the unanimous decision was that they all wanted instant noodles!! I was like "WHAT??!!?? How can I just serve your friends instant noodles for dinner? What would their parents think??!!"

Horrors! *Shudders!* - I dont normally allow my children to have instant noodles, tho they ask me quite frequently for it. I feel that it is not very nutritious (even when we add in an egg)!! I also feel that it contains too much msg (tho I am told that there are some now sold that do not contain any msg at all).

Anyway, I ended up serving them chicken nuggets (which I also think is not very healthy), fishballs, pizza and hot dogs. I must say that this time round the boys ate quite well, and enjoyed the food!

But, honestly, would you serve your children's friends instant noodles?? And would you be aghast if your kids came home from a party and told you that they were served that for dinner at their friends house??
Posted by stay-at-home mum at 5:08 AM 5 comments:

It means "Do you speak french?" Well I dont, but that is the current "fever" at my home.

You see, my son, has been selected by his school for an immersion in France this December in preparation for the YOG twinning programme. And he is so excited about it.

Though we have already booked our family year-end vacation, this trip organised by the scchool doesnt clash with it, and we have decided to let him go.

As part of the preparation for the trip, he is trying to learn a few french phrases so that he wouldnt be so lost when he goes there. So far he knows:

A slow start, but at least he is enthusiastic about learning the language!

Now I must teach him to "faire la bise" (kiss cheeks) when he meets some cute french chicks! ;D *wink, wink!*
Posted by stay-at-home mum at 10:55 AM 4 comments:

Yesterday Hubby and I left all 3 kids home alone to catch a movie. Previously, we would never dream of doing such a thing. But now that they are older and know how to co-operate, and that the exams are over for the older two, we took the plunge, and went without them. Of course, we were only a phone-call away!

We caught the movie "My Sister's keeper" - a story about how a couple had another child just for the purpose of saving the life of a sick child. I thought it would be a "sob-fest" and went armed with loads of tissues. But it didnt really turn out that way. Yes, it did tug at my heart-strings, and a few tears did roll - but the movie was more of one that got me thinking.

Am I controlling my kids too much? Am I deciding for them too often as to what is good for them? Am I considering their wants, needs and desires before making decisions for them? Granted, there are some which they are too young to make, but do I take their wants into considerations before making the decisions? How do children feel when they have a "sick" sibling? Do we cater to the wants of the "Sick" at the expense of the needs of the others? Do we do it just so that we dont feel guilty?

Many of these questions are tough to answer.

Now after watching the movie, I think I will be doing much more thinking before making decisions for the children. A real thinking, deep-thought provoking movie!!
Posted by stay-at-home mum at 5:52 AM 6 comments: